Read or tell the following story:

Jesus loved, served, and taught the Jewish people while he was on the earth, but there were some Jewish leaders who opposed him. They were upset that people were following Jesus instead of them, so they illegally had him tried and sentenced to death.

(Have the children read Luke 23:33 and then have a child pick the picture that matches the scripture and put it on the flannel board.)  Explain that to crucify means to nail or tie a person’s hands and feet to a cross and leaving that person to die.

Jesus was placed on the cross sometime before noon on Friday. At noon the sun was hidden from view, and darkness spread over the land for three hours. Those who were watching in the darkness heard Jesus cry out, “It is finished.”  His suffering had ended. He bowed his head and died.

How do you think his friends and disciples felt after Jesus was crucified?    After he died, Jesus’ friends and disciples carefully removed his body from the cross. They wrapped his body in fine linen cloth and with spices, as was the custom in those days. (Take off crucifixion cutout and have a child find and put up matching picture- the wrapping of Jesus’ body)

The Savior’s friends placed his body in a tomb. A tomb is a small room, often carved out of a large rock, in which people can be buried. The newly hewn tomb Jesus’ body was placed in belonged to a rich man named Joseph of Arimathaea. He was a follower of Jesus. (Take off cutout of wrapping the body and have a child find and put up the picture of the tomb.)

Jesus was placed in the tomb on Friday evening because Saturday was the Jewish Sabbath and burying people on that day was not allowed. A large stone was rolled over the mouth of the tomb doorway. (Have a child find and put the large stone cutout on tomb opening)

After Jesus’ body was placed in the tomb, the chief priests and Pharisees went to see Pilate. They remembered that Jesus had said that after three days he would rise again. They asked Pilate to have the sepulcher guarded against his disciples coming in the night and stealing the body away. They did not believe Jesus would be resurrected. They thought Jesus’ friends would hide his body and say he was alive again. The stone was sealed and guards were set to watch. (Have a child find the cutout of the guards and put it on the flannel board.)

The Sabbath was a long, sad day for his followers.  Early on the third day after his death, which was Sunday, an angel (the Joseph Smith translation says it was two angels) came down from heaven and rolled back the stone from the door of the tomb. (Have a child find the cutout of the angel and put it on the flannel board and then move the stone to one side.) The guards were afraid and shook and fell as dead men. (Lay down the soldier cutout)

Some women had wanted to put special ointments on Jesus body to prepare it for burial, but they didn’t have time before the Sabbath, so they came back as soon as the Sabbath was over to finish preparing his body. (Have a child find and put up cutout of women with ointments, off to one side, and take off the soldier cutout.)

As the women walked to the sepulcher they wondered how they would move the heavy stone from the tomb. (Put the cutout of the women close to the tomb) But when they arrived at the tomb they saw that the stone had been rolled away. The tomb was empty. Jesus’ body was gone. The women saw the angels, who told them not to be afraid. (Read Matthew 28:5-6) When the angel said, “He is risen,” he was telling the women that Jesus Christ had been resurrected.  (Hold up cutout of Jesus Resurrected) 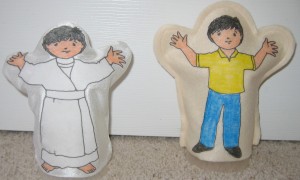 When Jesus was resurrected it was the first time anyone on earth had been resurrected. Because of Jesus’ resurrection, all people who have lived, or who ever will live on earth, will be resurrected. We will live again after we die, and our bodies will be immortal.  He made this possible for us because he loves us.

(Put the white robbed puppet on your hand, or on the hand of one of the children.) When we lived with Heavenly Father before we were born we were called spirits. This white puppet represents the spirit, which lived in the pre-earth life with Heavenly Father. We could move (move the fingers) and think and learn.

When we came to live on earth and were born, we were given earthly bodies. (Put the felt puppet over the white fabric puppet)  The spirit and the body were temporarily joined together, and the spirit gave the body life. (Move fingers)

When we die, the spirit and the body separate (take off the felt puppet, being careful not to take off the white puppet at the same time). The body can no longer move (indicate the empty felt puppet), but the spirit is still alive (move fingers) and goes to the spirit world to wait for the resurrection.

Friend March 2018 “For Parents of Little Ones” Help children understand that Easter is a time to remember the things Jesus has done for us.

Friend March 2018 “Jackson Loves Easter” Jackson loves Easter because it reminds him of Jesus and all the things Jesus has done for us. Friend March 2016 Ideas on how to help children focus on the real meaning of Easter.

Friend March 2018 “Seven Days Until Easter” Starting the Sunday before Easter, read the scripture for each day and color the matching numbered area. (Print and tape the two pictures together.) Friend April 2017 “A Special Easter Treat” Kate makes Easter rolls with her mom. Each part of the process remind us of the Savior’s atonement or resurrection. Link includes recipe. Friend March 1986 “Testimony of Easter” This Easter program has great ideas for a sharing time or lesson. Friend April 2019 Easter is about Jesus 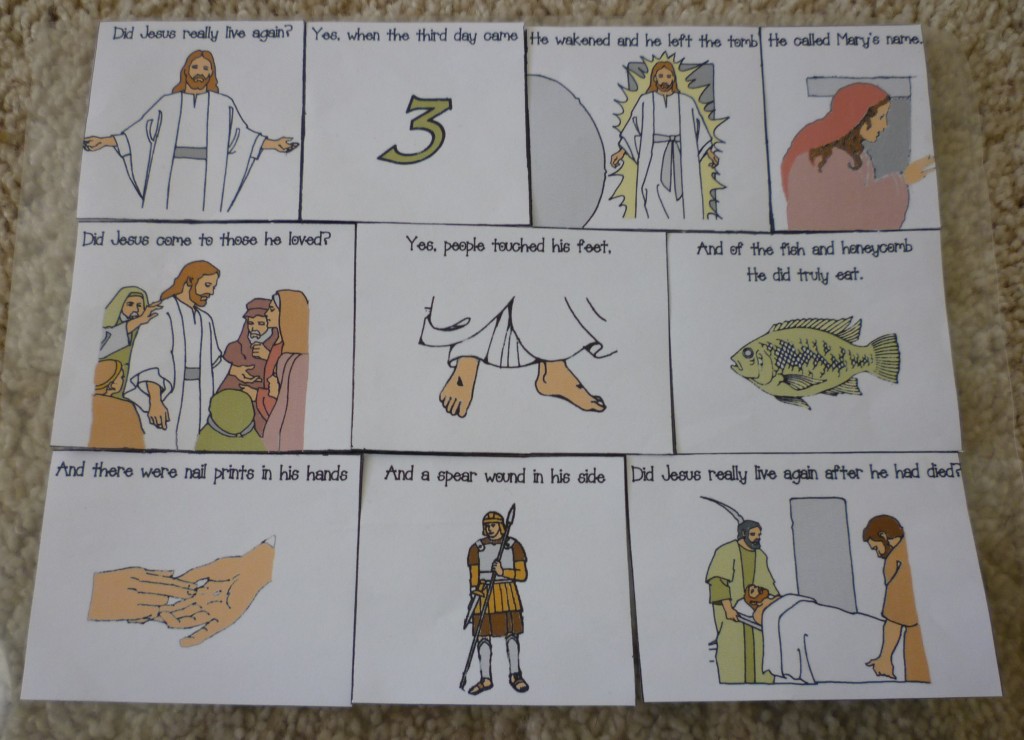 To help the children learn the song, have a child take one or two of the small pictures off the page protector. Sing the song again to see if they can remember the part that has been taken off. Repeat this process until all the pictures have been removed and the children can sing the song without them. The following actions could be used in place of a removed picture:

Did Jesus really live again (hold hands out with palms up)
Yes, when the third day came (hold up three fingers)
He wakened and he left the tomb (walk in place)
He called Mary’s name (cup hands around mouth)
Did Jesus come to those he loved (Put hands over heart)
Yes, people touched his feet (bend over and touch feet),
And of the fish and honeycomb (wiggle hand back and forth like a fish swimming)
He did truly eat (pantomime eating).
And there were nail prints in his hands (point to hand)
And a spear wound in his side (point to side)
Did Jesus really live again after he had died (hold hands out with palms up)
Oh yes! And so shall I (nod head)! 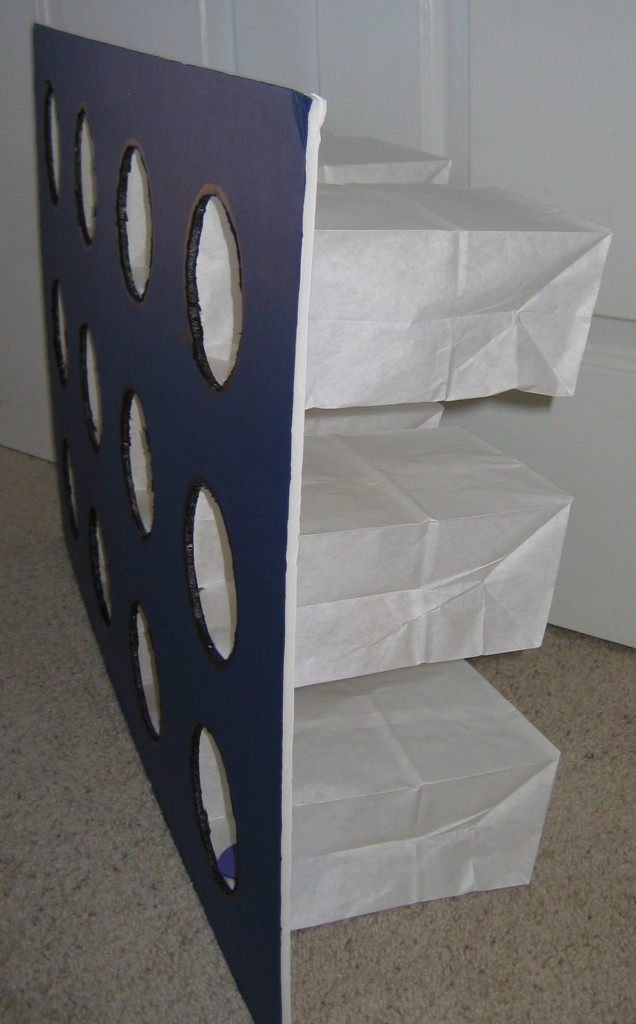 I told the children I was going to use Easter eggs to help them learn the song, and I showed them the Easter egg punch board. Inside the eggs were words to the song. I told them they were going to play a matching game. I had pictures to the song on the board, and the children matched the words that were in the eggs with the pictures on the board. Some of the eggs contained a foam hand, and the children who found those got to be my helping hand and fix any matches that were wrong at the end of the activity.

To break open an egg, a child had to peck at it with their finger, like a baby bird would peck to break the shell of an egg.

I had the children who found the foam hands sit in seats at the front. When all the words had been placed under pictures, I had the helping hand children take turns fixing the word strips. I held up numbers telling them how many were wrong before each of their turns. When they got all the words in the right place, we sang the song.  After that we talked about the words to the song.

I pointed out that the words “He is risen” is repeated two times with joyful emphasis. When we got to the part that says “He has burst his three day prison”, I asked what prison it was talking about? (Death)  On the part where it says “Let the whole wide world rejoice” I asked, “Why does the whole world rejoice about Jesus’ resurrection? (Because of Jesus’ resurrection we will also be resurrected and live again.)  Christ won the victory over death.  We honor Jesus, and show how grateful we are to him for what he has done for us, by singing this song with joy in our hearts.

The second week I hid Easter eggs around the room. In each Easter egg was a line from the song. I had a child look for an Easter egg while everyone sang the song. We took the words off the board that was in the Easter egg the child found. Then we sang the song again while another child looked for an egg.  This helped them memorize the song with fun repetition.

I cut about 2 1/2 inches off the top of each lunch bag.  I cut a slit 1 1/2 inches deep on each of the top four corners of the bags. I folded back the four edges. I put an open bag over a hole on the foam board and taped the folded back edges to the foam board.  Note: I used lunch bags because they could be folded up for easy storage of the punch board.

I cut out and rolled up each of the word strips. I put a paper clip on each one to hold it in place. I put each word strip into one of the paper bag openings on the board. I put a foam hand (any kind of item could be used for this)  in the remaining four holes.

I cut out 12 egg shapes from the tissue paper. The eggs were each 4 1/2 inches wide and 5 3/4 inches tall. I placed pieces of double sided tape around the outsides edges of the holes and placed a tissue egg over each hole.